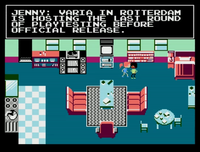 It is 1986. You just came home from a skate session when a Nintendo game cartridge falls into your hands. Excited to find out what kind of game is on the cartridge, you visit your friend who just bought a brand new Nintendo console two weeks ago. You plug in the cartridge and …

What Remains is a new darkly humorous 8-bit homebrew adventure video game for the 1985 Nintendo Entertainment System (NES), and developed by Iodine Dynamics. The game is currently in final development and will be released for free in 2018. By free we mean a free of charge NES ROM download, and we will publish the source code and assets of the game and tools we used. A limited edition of physical cartridges for the NES and the Famicom, using recycled hardware, will be also be produced.

During the development of the game Iodine Dynamics has worked with Het Nieuwe Instituut for preliminary research, and V2_ for hosting the early playtests. On June 22, Varia will host the last playtest for the game, and we are looking for players to come and give us feedback one last time!

Come save the planet and join us the evening of June 22!

What Remains is made possible with the support from creative industries fund nl.